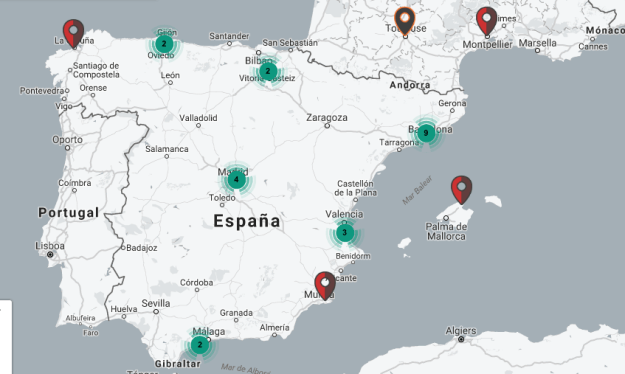 The ATM`s Bitcoin Radar takes the account of the quantity of cash dispersors (ATM Bitcoin) that are installing every day in the world, who reproduce faster.

Today, 3 of octubre, existe 803 ATM`s Bitcoins in 53 countries. Spain is the fourth contry with more ATM`s that allow transactions with the principal digital currency.

In the map you can see where the ATM ́s localized:

Those ATM Bitcoin are produced by 19 different companies and 185 different operators in the world. Is a business who`s already sort of expanded, but, more companies are monopolozing the market, especially in the area of manufacture of the ATM. Genesis Coin is the company that more procedee the ATM, for example, 315, this means 40% ofthe market.

Next is Lamassu, that produced 183 of this ATM. The first company that produce the service is Coin Source with 47 ATM Bitcoin, followed by CoinBTM with 38 and instacoin with 27 and ATM`s Bitcoin Exchange with 23 ATM.

The technology is really throwing and according with the information of Bitcoin ATM Radar, in the present are opened 2,3 ATM for day. The volume has been growing with the years: in January, 2014 the were only 8 ATM`s, nowadays they are 803, but if this continue it will double in one year.

In ATM`s Bitcoin, the user cand withdraw money of his account Bitcoin, but he will receive it in the local currency: dollars, euros, etc. Or, he can deposit traditional currency to convert it in Bitcoin and deposit the money in his account. It`s important to say that the ATM Bitcoin ask more information for the user, than a conventional machine.

Alcúdia have their first bitcoin ATM, from the Balearic Islands.The company with the headquartes in Girona,  ATMs Bitcoins Exchange,has installed the cashier at the Carrer Pollentia,15 B,  number 1, monopoly, and it’s working.

The, “device” , designed for  BTC fácil, allows selling and buying bitcoins.The bitcoins is a digital value exchange method, , that started to work in 2009. It´s about a community project and free software, based on cryptography, and is not controlled by any gouverment or any company.

The bitcoins can be changed almost instantly to real money, and more and more comercials accept it as a way of payment. The bitcoins have more advantages than real money, for exemple: it is annonymous, you can send them as fast and easy as you send an email, is not necesary the intervencion of a third person to perform a transaction national or international, you can fractionate them as you desire, and it is verry hard to falsify,thanks to the cryptographic complexity and offshoring.

In the last year, the bitcoin technology, has woken the interest up of the traditional bank,and more specialists think that btcoin can  revolutionize the financial markets,as much as the internet has done to the communications.

ATMs Bitcoin Exchange,it´s a company ,that has been  founded in january of 2015, in Girona, and it has like objectives to install and manage bitcoins cashiers, and takes part of the same   BTC fácil ,group.For the moment, it has 20 units  in Spain, to that it adds the installation from the Balearic Islands. Also it has started his international expansion, by installing a ATM, in Montpellier.

Helpful video about how to use the cashiers:  cajeros bitcoin de BTCfácil

We had  just finished to add a system that will be updated in real time,and the system will show  you which Atms is active,or not. mapa de cajeros BTCfácil